skip to main | skip to sidebar

I spent the monsoon of 2008 in the serene montane and evergreen forest of West Kameng district of Arunachal Pradesh studying the scorpion diverity in the Eaglenest Wildlife Sanctuary. This is a part of the report that will be submitted to the Arunachal Pradesh Forest Dept. I will post the trip report soon.

A systematic account of 5 species of scorpions (Arachnida) collected during a survey in Eaglenest Wildlife Sanctuary (EWS) and adjoining area is given. Euscorpiops bhutanensis is a new record for while Euscorpiops sp. is either Euscorpiops beccaloniae or new taxa. A key to the scorpions of the area has also been provided in the report.

The is one of the Biodiversity Hotspot (Meyrs, 2005). The few remaining tracks of virgin rainforests can be found here in the states of north-east though these areas are being lost at an alarming rate. Conservation strategies based on the reports of such faunal inventories could prove extremely effective in protecting these areas.

Though these forests are exceedingly diverse, our knowledge about them is unfortunately very poor and in bits and pieces. Extensive surveys are needed to get a preliminary idea of the faunal diversity of these areas.

The areas in and around EWS, district, Arunachal Pradesh were surveyed for scorpions in the months of May and June 2008. The areas north of Rupa (not a part of EWS) were surveyed by a team of zoologist from Zoological Survey of India in early 1990’s. Their survey resulted in the discovery of Euscorpiops kamengensis from Sera village close to Bomdilla (Bastawade, 2005). To the best of our knowledge, this is the first ever survey of its kind being conducted in this area.

Areas adjoining Ramalingam, Lama Camp, Sessni, Khellong and Doimara were extensively surveyed. The searching in most of these places was restricted to the areas along the road. Though at places were access to the forest was possible those areas were also surveyed. Random search method was used during the survey and scorpions were searched for under rocks, in crevices and under fallen tree trunks. A UV torch was used to locate scorpions at night as scorpion’s florescence in UV increases the chances of spotting a scorpion. Once spotted the scorpion was picked up gently using forceps (6 inches long) and were placed safely in a bottle.

Similar looking specimens were photographed to check for trichobothrial patterns and number and the only the ones which showed significant variations were collected for further studying. The others were immediately released at the location of capture.

Distribution: Numerous specimens were observed under rocks and in crevices near Lama Camp (2350 m) in EWS.

Remark: The specimen was described on the basis of two male specimens collected from Gomchu, in 1966. This species has been reported for the first time from and a detailed description of a female specimen has been given. 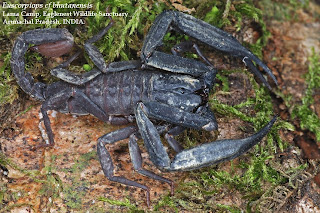 Distribution: A single specimen was collected from Khellong (750 m) under a rock. Also known from other parts of Arunachal Pradesh and . 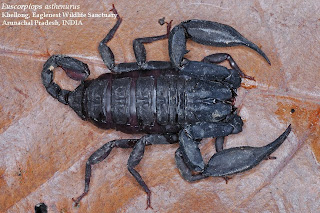 Large sized scorpion. The mesosoma is granulated, with one median carina, and the seventh segment ventrally bears four inconspicuous carinae. The entire carapace is granulated, without carinae. Pectinal teeth number 8, 9 or 10. The metasoma is smooth, carinated with only sparse granules. The dorsolateral carinae of the third and fourth segments posteriorly terminate in a pronounced tooth. The telson is elongate, with minute granules, exhibiting an annular ring at the vesicle/aculeus juncture. Body colour entirely black with red telson.

Remarks: The specimens closely resemble E. beccaloniae but differ in some morphological aspects. E. beccaloniae was described from a single male specimen collected from in 1930. 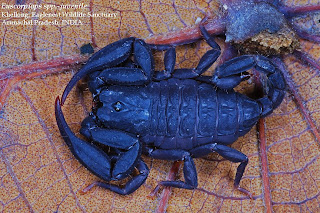 Distribution: Two individuals were found one at Ramalingam (1250 m) and other at Sessni (1250 m). It is a widespread Euscorpid distributed all over Arunachal Pradesh. 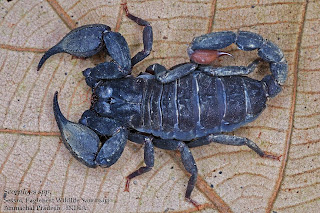 Aculeus to vesicle length ratio 1/8 in males and 1/3 in females. Manus with seven carinae. Median eye located anteriorly in the ratio 1:1.8.

Distribution: We found two male and two female specimens in Khellong (750 m) under pile of rocks. This is a rare species and hardly anything is known about them. It has been reported from Lohit district of Arunachal Pradesh.

Remarks: This find sheds new light on the probable range of this scorpion and may suggest that it is widely distributed. 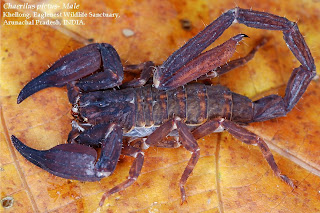 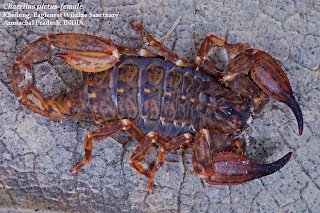 1. Aculeus to vesicle length ratio 1/8 in males and 1/3 in females. Manus with seven carinae. Median eye located anteriorly in the ratio 1:1.8………………. Chaerilus pictus 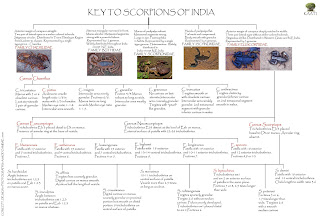 I am grateful to the following people in helping me with my stay at Eaglenest and during the preparation of this manuscript, Ramana Athreya for being a friend, philosopher, guide and providing adequate monetary support to carry out the survey. Chintan Sheth for all the discussions we have had over taxonomy and for being a very resourceful companion both on and off the field. Kesang, Sange Khandu and Dawa Tsering Tamang for helping me find scorpions and being more than porters to us. Mr. Indi Glow for making my stay comfortable in Eaglenest. Mr. G.N. Sinha, Director of SFRI Itanagar, for granting necessary permissions to loan and study the specimens. I thank Dr. D. B Bastawade for his useful comments in improving the manuscript, without his constant support and encouragement this MS would not have materialised. Thanks to all who might have felt that they have contributed in the preparation of this note.

Hi Guys
Just back from a brief visit to Bhimashanker. Had gone there specifically for finding two scorp species that had eluded me for quite some time. Though I had seen both the species once or twice before, I never managed to photograph them.
This time I managed to get hold of one of those species Neoscorpiops taenicauda and pop it...
The genus Neoscorpiops is endemic to India and is known only from a few restricted localites.
The genus is represented by only three species viz. N. satarensis from Mahabaleshwar and Satara in Maharashtra, N. deccanensis known only from the type locality Sihnagad forest in Pune distrct in Maharashtra and N. taenicauda Matheran and Bhimashanker in Maharashtra.
These are black coloured, small to medium sized scorps which generally are found in stone cervices or under rocks. They are scorps of moderately high elevations and are conspicuously absent at low elevations. The species can be distinguished from each other by the number of ventral trichobothries on the patella.
A publication by Dr. Bastawade in JBNHS is wroth reading for anyone who is interested in working on these scorps. In case anyone wants details let me know i can forward a copy of the MS.
Cheers
Aamod 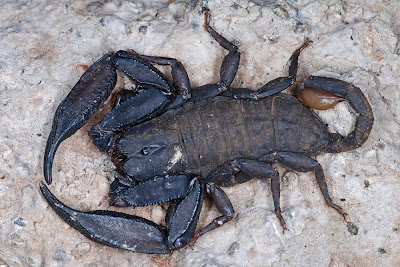 Orthochirus Karsch, 1892 consists of small-sized buthids whose size does not exceed 60 mm (Kovařík, 2004), but however Indian forms do not exceed 40 mm. The carapace in lateral view is distinctly inclined downwards from the median eyes towards the anterior margin. Species in this genus exhibit beta-configuration in arrangement of trichobothries on dorsal surface of femur of pedipalp. Tibial spurs are present on the third and fourth legs. The I and II metasomal segments without carinae. IV and V metasomal segments ventrally punctuate. Telson elongated, aculeus as long as or longer than vesicle (Tikader and Bastawade, 1983; Kovařík, 2004).

Currently 29 species have been included in the genus Orthochirus globally (Kovařík, 2004; Rein, 2008), out of which 5 have been reported from India. Of this the status of O. scrobiculosis (Grube, 1873) is considered doubtful (Kovařík, 2004). Apart from this, based on the presence of d2 on the dorsal surface of O. krishnai, Kovařík (2004) considered this species as a nomen dubium. 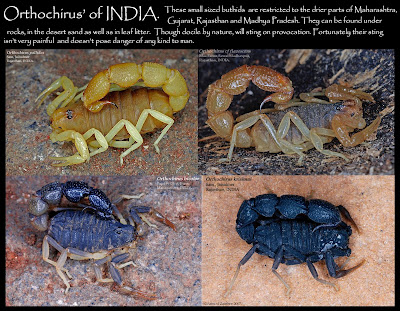 Scorpion Files- http://www.ub.ntnu.no/scorpionfiles/ One of the most comphrehensive websites for scorpions. Contains excellent photographs of scorps, useful links, there is blog that has been created which is updated regularly.

František Kovařík- http://kovarex.com/scorpio/ One of the few scorpion taxonomists who have extensively worked on Indian scorpions. You can download most of his works from this website.

Finally found a easy way to share my experience and the joy of studying Indian scorpions
I hope you will find "scorps" interesting and beautiful (if u dont ... its still acceptable) as I do.
Knowledge is like water... never say "No" to anyone who is thirsty!
Share and Care!
Posted by Aamod at 8:49 AM 18 comments: